The Ridiculous and Absurd in 1920s DC

It was a great treat to watch a talk by UCLA History Professor Robin Kelley, in which he explains his term "racial capitalism." Among many fascinating things, Kelley said, "The purpose of racism is to control the behavior of white people"; guns and tanks are used to control the behavior of People of Color. The benefits of whiteness -- jobs, wealth, education, etc -- are unevenly distributed. So, even for those who will benefit minimally from whiteness, they will behave in ways that restrict themselves as human beings and even in ways that greatly hurt themselves. While this seems natural or normal to white people, Kelley goes on to say, it sure doesn't seem natural or normal to People of Color. This seems ridiculous and absurd.

This reminded me of a fascinating survey I read on Tuesday at the Library of Congress. In 1929, former Howard Sociology Professor William Henry Jones finished a study titled The Housing of Negroes in Washington, DC for the Interracial Committee of the Washington Federation of Churches. Jones wondered why white people did not want to live near African Americans. So, like any sociologist would, he asked them why.

Jones systematically asked 200 white families why they did not want to live near African Americans. He found:


The basis of many of the objections to living with Negroes lies so deeply embedded in the realms of social psychology and human nature that few of the persons who were consulted could formulate any clear and lucid statements of their attitudes and feelings regarding Negroes coming into their neighborhoods. (p. 74)

Basically, to Jones, their reasons seemed ridiculous and absurd. As African Americans moved into their neighborhood, these people would immediately sell their houses at any price, leave behind neighbors and cherished community, and shun their fellow human beings.

As a great sociologist, Jones figured out the social forces pressuring these people to act this way: 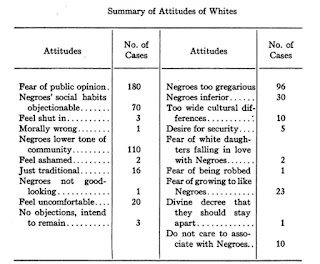 So, here we have racism performing its primary role: controlling the behavior of white people. To everyone else, this situation seems ridiculous and absurd.

And some white people chose to remain, including "Foreigners" -- like Italians and Russians -- who "seek refuge among other peoples who are also victims of the white man's prejudice" (p. 78).

Posted by Johanna Bockman at 5:29 PM