The Lost Connections of the Friendship House (II)

Someone wrote me and said that during the past 20 years, the Friendship House was no longer really carrying out its social services mission. Possible reasons: loss of funding? gentrification moving those helped by Friendship House farther away? loss of good staff?

I'm going to be reading more in their records soon, looking for some answers. Let me know your thoughts about or experiences with the Friendship House. It really helps to have your input.
Posted by Johanna Bockman at 4:19 PM 1 comment:

The Lost Connections of the Friendship House 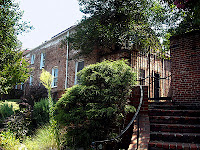 The Friendship House was a settlement house. Settlement houses, like Hull House in Chicago run by Jane Addams, were set up integrate immigrants, help reduce poverty, and advocate for political change. African Americans also established settlement houses to help African Americans migrating from the South to large cities. At the GWU Special Collections, I have been reading the letters, reports, and records of the Friendship House. It quickly became apparent to me the immense loss our community has experienced.

The Friendship House was a place that helped organize the poor to advocate for themselves and create community. The Civil Rights Act and the Economic Opportunity Act of 1964 provided funding to Community Action Agencies like the United Planning Organization and the Friendship House to fight poverty by empowering the poor.

What's a kid to do after school or during summer vacation when Mom and Dad have to work? There are plenty of answers for those participating in the DCKids program at Friendship House in Washington, D.C., one of Washington's oldest social-service agencies. They can take guitar lessons, learn how to resolve conflicts peacefully, talk about African-American history, write a play about drug abuse and violence, or visit one of the Smithsonian Institution museums.

They also worked with organizations across Ward 6 and the city. Now, the poor have been displaced from their homes, especially with the closing of the Ellen Wilson, Arthur Capper, and Carrollsburg public housing projects, where the Friendship House worked regularly. At the same time, according to the Census, poverty has remained at 20% over the past 30 years in Ward 6. Middle- and upper-income residents have benefited from the work that the Friendship House did. An immense network has been ripped out of Ward 6 with little left to replace it. With the end of Friendship House, who is left to empower the poor?

The historic significance of Friendship House should be a concern for the Capitol Hill Restoration Society and the Historic Preservation Review Board: "Historic preservation safeguards the District of Columbia’s cultural heritage, supports the local economy, and fosters civic pride in the city’s beauty and history." From a Hill Rag article about the closing of the Friendship House:

Nancy Metzger, Chair of the Historic Preservation Committee of the Capitol Hill Restoration Society, the community gatekeeper for Hill historical preservation, says she is glad that the property has been purchased and hopes that long overdue repairs might be initiated. Metzger expressed concern that the continuing neglect and unabated damage of the last years might be its permanent undoing. “I understand water has gotten in. It has been neglected. The roof needs to be addressed,” Metzger lamented. There are also concerns that faulty electrical wiring expose it to the strong possibility of fire. “We want it to be restored and brought back to the community in some way.”

P.S. Any updates on the Friendship House from those who worked there would be especially welcomed.

P.P.S. In what ways have you seen or experienced the disappearance of the Friendship House?

Earlier this year, the tiny Persian Gulf nation of Qatar was looking for a safe place to park some of its vast oil wealth. Qatar’s investment arm chose to pump $700 million into the new CityCenterDC, a downtown Washington apartment, office and retail complex that doesn’t have a major tenant signed up yet. The District, the Qataris decided, was as low risk an investment as could be found anywhere in the world.

Foreign investment in DC real estate and businesses is not new. On the one hand, this investment in cities has been a worldwide strategy by investors since the late 1970s. Deregulation and high interest rates at that time in the US financial markets made foreign investors very interested in putting their money in US markets. Foreign investors as well as domestic investors (such as mutual funds and pension funds) realized that they could make much more money in financial markets than investing in production. My favorite sociologist Saskia Sassen, as well as other great sociologists like Greta Krippner, talk about the enormous inflow of capital into the US especially from Japan, how this expansion of credit has inflated real estate prices and created new forms of financial risk, and the resulting financialization of our economy (the increasing dominance of financial profit making, as opposed to profit making in production, in our economy).

On the other hand, as discussed by geographer Jason Hackworth, since the 1970s, cities around the world have actively encouraged investment in real estate in their center cities. Enticing foreign investment in such real estate is a strategy by city governments and business groups around the world. As I talked about in a previous post, "What is Neoliberalism?," in this new context, cities like Washington, D.C. have taken on many of the tasks once carried out by the national state, but these cities do not have the resources to realize these tasks (due to austerity and low tax rates) and do not have the power to stand up to the demands of multinational corporations. Cities have thus become what sociologists and geographers call "entrepreneurial," competing with other cities for international investments, high-bond ratings, and high-income residents (including the "creative class" discussed by Richard Florida). The entrepreneurial city must focus on competition and neighborhood branding to lure new residents and international investors. These trends create "dual" cities, with areas of great wealth and other areas of great poverty, through gentrification and dispersal of the poor from certain places (The Yards in SW and Hine Jr. High, both in Ward 6) to make way for new development projects funded by international investors, which in turn fund the entrepreneurial city government. As a result, as the Post article quotes the chair of the Federal City Council, which represents the DC business elite:

'there's less of a local D.C. business community' now that companies based elsewhere control many of the city's major employers. But businesses owned by out-of-town interests also have a stake in the city's financial and political health...those executives are recruiting candidates to run against council members who are 'taking us back 20 years.'

Does "taking us back 20 years" mean taking us back to a time when politicians responded more to their constituents and less to the demands of international capital in our nation's capitol? Are we unintentionally turning DC into a kind of Disneyland for adults and a safe investment for international investors, while undermining what makes DC interesting and compelling as a city? Furthermore, are all DC residents equal, as democracy requires, or are residents measured by the revenue they generate?
Posted by Johanna Bockman at 11:58 AM 3 comments:

My Book on Neoliberalism

Over the weekend, C-Span Book TV showed their interview with me about my book Markets in the Name of Socialism: The Left-Wing Origins of Neoliberalism. It's about 12 minutes long. I talk about what neoliberalism is -- policies supportive of free markets and against the state's role in the economy, though I would also add that neoliberalism is also very supportive of hierarchical authority. Neoliberal policies support hierarchical corporations and states. One economist, Ronald Coase, famously saw the similarities between the Soviet Union and large American corporations, both were/are planned societies. In my book, I talk about the ideas of many economists who envisioned societies without these hierarchical organizations.
Posted by Johanna Bockman at 12:43 PM No comments: