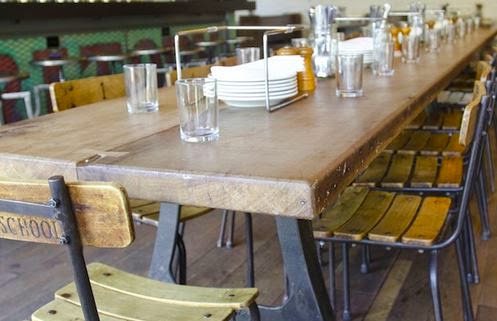 Sociologists have noticed that middle- and upper-income individuals worldwide have shifted from highbrow consumption to omnivorous consumption of music, literature, food, and so on. In the area of food, this has meant a shift from fine dining to more casual dining across a wide range of cuisines. Here in DC, we see an amazing variety of restaurants opening to excited acclaim: taquerias, chifa restaurants, Taiwanese-style ramen shops, Balkan small plates places, farm-to-table restaurants, and so on.  The French sociologist Pierre Bourdieu had argued that highbrow consumption was a way those with higher social class distinguished themselves from those with lower class status, bringing this distinction into their bodies and potentially becoming nauseous or afraid of contamination when eating lower class food. Thus, we can see this relatively new cultural omnivorousness as a movement away from snobbery and towards equality or a kind of democratization of taste.

However, sociologists have shown that our omnivorousness is a new way to seek status, which is linked to gentrification and continuing inequality. In the American Journal of Sociology, University of Toronto sociologists Josée Johnston and Shyon Baumann presented their analysis of foodie writing from such magazines as Gourmet. They found that this high-end foodie writing was dominated by discussions of food or restaurants as "authentic" or "exotic." "Authentic" places have carefully developed historical back stories tying them to a specific location or a specific person, and are presented as having simplicity and as relatively free of commercial interests, "Exotic" places are seen as providing rare or unusual foods, though the majority of foods discussed in gourmet food writing are not from Asia or Africa or Latin America but rather from various corners of the United States.

These frames reflect a long-term American rejection of elitism and embrace of democracy, inclusivity, and equality. However, this democratic ideology obscures how gourmet food writers, restaurants, restaurant review writers, and individual consumers use authentic or exotic foods to display their cultural capital and maintain status. In the case of gourmet food writing, writers legitimate a relatively narrow range of foods, which, in fact, require considerable cultural capital to recognize as desirable and considerable economic capital to afford. Think about Union Market -- "a district with authentic soul" -- replacing the wider variety and inexpensive food outlets of the shrinking or demolished Florida Avenue Market. In contrast to the overt democracy ideology, there is a covert ideology of status and cultural distinction, which reinforces inequality.

Sociology PhD student at the University of British Columbia Zachary Hyde built on this work by studying newspaper reviews of new restaurants in Downtown Eastside, a gentrifying section of Vancouver. In Downtown Eastside, young chefs have opened trendy restaurants of casual or "authentic" dishes. For example, one reviewer wrote, "J.C. Poirer once worked at the late, great Lumiere in Vancouver under Rob Feenie...In the last few years, he abandoned haute, rolled up his sleeves, and segued into the casual rock 'n' roll dining scene in the Downtown Eastside. At Pizzeria Farina...he makes a small selection of simple artisanal pizzas" (Hyde 2014: 348).  Elite cooking is now marked by "authenticity," "authentic" "creativity," and honesty. It is presented as without contamination by nonartistic motivations, like making a profit.

In the Washington Post, Tom Sietsema works within these trends in his review of the restaurant Rose's Luxury:


The backgrounds of the staff, led by chef-owner Aaron Silverman, 31, read like a list of hot spots from around the country. General Manager Andy Erdmann hails from the esteemed Uchi and Uchiko in Austin. Chef de cuisine Scott Muns comes to the project from the very good Volt in Frederick. Last but far from least, Silverman, a Maryland native who trained at L'Academie de Cuisine in Gaithersburg, counts time at the beloved McCrady's in Charleston and Momofuku Noodle Bar in New York.

The top chef's philosophy is simple: "I'm not in the restaurant business. I'm in the good times business." Fun is in his blood; the restaurant's name is a salute to the chef's long-gone grandmother, Rose Silverman, revered in her time for her dinner parties, poetry and playwriting. "She enjoyed life and having fun," says her grandson. (Post, 10/15/2013)

Sietsema highlights the highly trained chefs in a laid back atmosphere working on simple dishes with personal meaning and connections, while not discussing economic motivations that might contaminate the carefully developed back story and the "fun." Yet, chef Aaron Silverman is opening a fine dining restaurant -- "'really fancy. Fancy is fantastic. Formal not so much,' says Silverman while sitting at a rustic wooden table at Rose's" -- so we are likely seeing another layer of fine dining developing.

Hyde argues that these restaurants are presented or present themselves as helping the community. They may do this by "revitalizing" or "improving" the area or by donating to local charities or by hiring employees. Yet, according to Hyde, "the tastes of newcomers trump concerns over accessibility to affordable goods" (p. 355). Brooklyn College sociologist Sharon Zukin has also found that consumption spaces like restaurants privilege and legitimate newcomers' consumption as "authentic," which allows newcomers to stake claims to the neighborhood like at Union Market. These claims to authenticity reflect the interests of new residents and are a means to excluding other residents either from consumption spaces or from the area more generally. Thus, claims to authenticity help to gentrify spaces and displace people, while presenting this as merely great, eclectic taste.