Earlier this week, the Washington Post reviewed a Pew Research Center report on the widening wealth gap between whites and minorities. Lately, I have written about the Gini index, which is often used to measure inequalities in household income. The Pew study importantly studies household wealth, which is made up of assets (houses, cars, banking accounts, etc) minus debts (mortgages, auto loans, credit cards, etc). According to the Post, the most significant findings were: 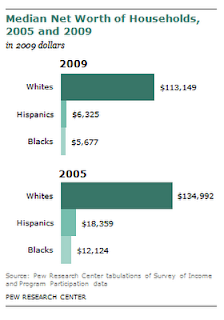 The median net worth of a white family now stands at 20 times that of a black family and 18 times that of a Hispanic family — roughly twice the gap that existed before the recession and the biggest gap since data began being collected in 1984."

The Pew Research Center graph to the left dramatically represents the enormous differences in wealth.

Did the wealthy become more wealthy and the poor become more poor in Ward 6 during the recession? I'm working on getting an answer to this.
Posted by Johanna Bockman at 1:28 PM 2 comments:

I have spent the last two weeks co-teaching a course in Budapest at the Central European University. One of our main topics was neoliberalism. For most people outside the United States, neoliberalism is a well-known concept. Sociologists around the world use the term neoliberalism to understand many global trends. I use the concept of neoliberalism as one helpful tool for understanding what is happening in Ward 6 and elsewhere around the world.

To those unfamiliar with the term, I generally say that neoliberalism can be understood as the ideas and policies of Margaret Thatcher and Ronald Reagan that support free markets and are anti-state. However, neoliberalism is a confusing term, because different groups have used the term in a variety of ways. In general, people see that capitalism has changed since the 1970s, and they call this new kind of capitalism "neoliberal." Broadly, neoliberalism contains the following changes:
Is there neoliberalism in DC?
Posted by Johanna Bockman at 2:29 PM 7 comments: