Many people are thinking about how to create new jobs and inclusive cities around the world. Today, I received this call for papers for a conference and a book on re-industrializing cities. Yes, DC is not like other post-industrial cities like Pittsburgh or Detroit, but it did have industry and a working class. Now, DC has what might be called "boutique manufacturing," though this article on the local boutique ice company is probably unfair to other manufacturing in the area. Would re-industrialization help DC? Is boutique manufacturing the way to do this?

Call for Papers: [New Industrial] Revolution and the City:
The industrial revolution changed everything; our social structure, our culture and the economy. In many ways it created the world we live(d?) in. Industrialisation changed our cities. However, the current, post industrial model of Western cities, based on property and land speculation seems to be in crisis and looks as if its coming to an end. Cities in other part of the world – in Asia, Africa and South America are not (just) post-industrial they are still growing. What went wrong in Europe? Can we learn anything from the industrial city model? Can we learn from Asian, African and South American cities? Is urban re-industrialisation an answer for the crisis we face in Western cities? Could urban re-industrialisation be imagined as a progressive socio-political and economical project, aiming to create an inclusive and democratic society based on cooperation and symbiosis that goes way beyond the current model of a neoliberal city?
Posted by Johanna Bockman at 2:49 PM No comments:

I just finished reading Rage is Back, which I greatly enjoyed. Its exploration of the graffiti/writing scene in New York has sent me off on my own exploration. Today, I went to the "Ill Street Blues" show at the Corcoran. I highly recommend seeing it before it closes tomorrow. Here are just a few images from the show:


Many of the images criticize greed, gentrification, and capitalism as a monstrous force, while people of various sorts hide away in the detritus (or the beauty) of the post-industrial city creating a whole other social world.

P.S. If the artists want me to take down the slideshow, just let me know.
Posted by Johanna Bockman at 12:16 AM No comments:

It seems that whenever a high-end development is going in, the press has to repeat the developers' or the real estate agents' marketing materials. In the Post today, the Where We Live Blog reported on the redevelopment of the Edmonds School at 9th and D St, NE, on Capitol Hill. The totally conventional renovation technique of the past 40-50 years -- "exposed brick and high ceilings coupled with hardwood floors and such standard amenities as an in-unit washer and dryer" -- are described as "a 'creative confluence' of old and new" and "allows the historical elements to bleed through." 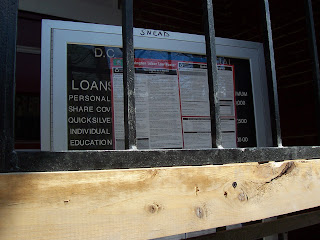 Most significantly, the Post has to legitimate the new development with its $1.8 million units by degrading a fake past: "The old school had become an eyesore in recent years with cars parked on the front lawn and cheap, not historically correct vinyl windows installed." I've walked by this building numerous times and never saw it as an eyesore.

As far as I remember, it also never had a front lawn, but rather had very clean cement that ran from the building's base to the sidewalk. In addition, it was the functioning corporate office of the DC Teachers Federal Credit Union.  I took these photos today of credit union's information about loan rates, bizarrely covered with the Washington State Labor Laws, and a sign stating that the credit union's ATM was no longer available, presumably because the building had been sold. 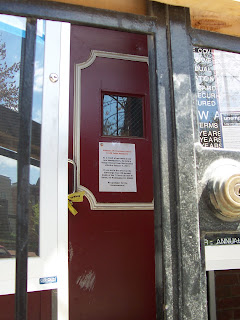 How many neighbors were dismayed by the "cheap" windows on the building?

The Washington City Paper similarly legitimated the new Hawk and Dove by stating: "The original place was dark and rotting, the smell of urine persistent and legendary." The next week, I got my name in the paper for my comment: "I definitely don't remember any urine smell. I remember it as a great bar." My neighbor wrote, "It's the suburban mall-ification of the Hill! The place looks and feels like this guy's other restaurants in the neighborhood, only more corporate."

The press presents a past of ruin, rotting, and chaos. Maybe these tall tales come from the developers and real estate agents, I don't know. Yet, these myths do a disservice to everyone. Those living here before 2013 are seen as poor guardians of the city and our only hope comes from those who can afford $1.8 million homes and the developers who convert public property -- Edmonds was once a school -- into privatized space for them.

P.S. The Post also repeated the developer's words: the developer Martin Ditto "says that he thinks that the condos will draw a mix of people, from retired couples wanting to downsize to young professionals looking for a safe place to live on Capitol Hill" (my italics). Is this news? Is this objective reporting?
Posted by Johanna Bockman at 9:53 PM No comments:

Tonight: an opportunity to visit Eliot-Hine

Eliot-Hine Middle School is the home of Eliot-Hine Radio. Tonight, Eliot-Hine Middle School Civics Club, with other organizations, is hosting the At-Large Council Candidate forum. It should be a very helpful evening. On Tuesday, April 23rd, we will vote on 1) one At-Large Council candidate and 2) the Budget Autonomy Charter Amendment (see text below). Here is info about tonight's event:

Our moderators will be Mark Segraves from NBC4 and Thomas Byrd from We Act Radio. They will be joined by a student representative from the Eliot-Hine Middle School student government association to ask a few questions that have been developed directly by the students. The questions and topics will be focused on education and youth issues. This is a non-partisan forum and all candidates have confirmed. The forum is being sponsored by the Eliot-Hine Middle School Civics Club, Stuart Hobson Middle School, Jefferson Academy, Defeat Poverty DC and the Capitol Hill Public School Parents Organization. (from Charles Allen)

Get your shoes fixed at Peter Bug's

John "Peter Bug" Matthews is a fifth generation DC resident, an alumnus of Tyler Elementary School, a great community organizer, and the founder of the Peter Bug Shoe Repair Academy at E and 13th St SE (a block from Safeway). He teaches young people to repair shoes and, in general, how to run a business. Bring all your shoes there to be repaired.

Here are some positive reviews:


"Also wanted to thank you for sending me the info on Peter Bug's spot.  Had a whole mess of old shoes repaired there and now they're good as new." (from my friend)

"One on the best things about living on the Hill.  Great price, great work, and they are so friendly!! From someone who doesn't own a car and walks a lot - Peter Bugs Shoe repair makes my life a lot easier!!" (from Yelp)

Save the Date: Peter Bug Day will take place on Saturday, May 18th. Peter Bug Day is a great celebration: music, BBQ, kid's games and activities, and...the parade! From past experience, the parade begins at 10am at 19th and E Streets SE (in front of Congressional Cemetery) and ends at the Peter Bug Academy.

So, Peter Bug is a particularly great person to support in the neighborhood. In addition, Peter Bug is a fellow sociologist in Ward 6!
Posted by Johanna Bockman at 1:22 PM 1 comment: