"Politicians in the District love to close shelters for so-called humanitarian reasons. But after shelters close they don’t seem to care all that much that people who lived there don’t have anywhere to go, and often end up on the streets." -- Diana Pillsbury, "In Defense of Shelter"

DC government wants to shut down the Community for Creative Non-Violence (CCNV) shelter near Judiciary Square, and some in the government also want to close the DC General shelter on Capitol Hill. My sociology colleague at Mason, Victoria Rader, wrote about one of the founders of CCNV, Mitch Synder (see picture). Several years ago, I went with a bunch of my friends to tour of CCNV, what is technically called the Federal City Shelter. What impressed me right away was that our tour guide was one of many homeless who lived at CCNV and who run the shelter themselves. CCNV is a unique homeless shelter, an asset that should be preserved, at least until the day arrives when all the residents have apartments or some kind of shelter that they can afford.

I have been hearing great acclaim about Diana Pillsbury and her work to save DC's homeless shelters. According to Diana, CCNV "is by far the largest shelter in the DC area, and in the country, with a capacity of around 1,350 people, regularly serving +/- 1,200 people." Diana says:

From my point of view, discussing the demolition of the Federal City Shelter is premature. This winter, we had deaths occur due to hypothermia: people froze to death. We have a family shelter that is at capacity, and many families who have no place to live. Youth providers turn away young persons seeking shelter daily, they too, are at capacity. Public housing has been cut to the point that it is almost non-existent. Housing prices are on the increase. Why then, are we talking about shutting down DC’s largest shelter? Can we really find housing for 1,200 people, when can’t even house those persons currently on the street? Is this really about protecting the interests of homeless persons, or is it about the DC Government making money off the sale of the property? CCNV is the most valuable asset homeless persons have; and thus, people should think twice before agreeing to shut it down.


Also present at the meeting was real estate developer Douglas Jemal, founder and president of Douglas Development Corp. The developer, known for revitalizing historic properties for use as retail, office and residential sites, said that he was looking forward to helping address problems with homelessness in Washington.

Is the CCNV Taskforce more about money to be made than about the money that needs to be spent on our fellow DC residents? As you can see in this WETA documentary on CCNV "Promises to Keep", many of the problems that CCNV has had since the beginning continue today, since the government does not want to pay to maintain homeless shelters or provide adequate affordable housing:


Here is "the homeless homeless advocate" Eric Sheptock speaking on the lack of representation of CCNV residents on the CCNV taskforce:

Posted by Johanna Bockman at 7:34 PM No comments:

This Saturday, July 5th, the Navy Yard Neighborhood Association (NYNA) is hosting "A Celebration
of our Community’s History Part I." During this afternoon event, there will be many interesting activities and discussions (including a presentation by me): 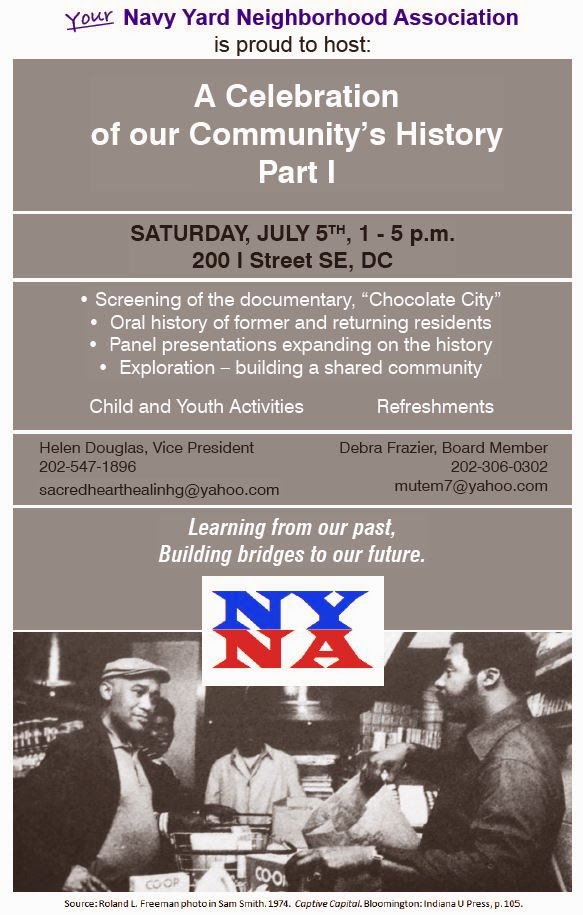 The NYNA is creating a series of events based on the idea "Learning from our past, Building bridges to our future." They are trying to deal with the past and do the difficult work of creating a connected neighborhood. From 1958, the Capper-Carrollsburg public housing project housed about 700 households in that area. The former residents had formed ties with each other and with homeowners nearby (including those around Garfield Park). The project was destroyed and replaced by Capitol Hill Quarter, a mixed-income development. The documentary "Chocolate City" is about the Capper-Carrollsburg residents' resistance to their displacement.

The public is invited. Please share these event details with others. You can RSVP here.
Posted by Johanna Bockman at 1:19 PM No comments: