The DC Sociological Society is kicking off the 2014-2015 year on Thursday, September 4th with the DCSS Presidential Address by me. I'll be talking about gentrification in DC. The event will happen at Mason's Arlington Campus, which is just a couple of blocks from the Virginia Square Metro (see map below, Orange/Silver lines) and has visitor parking underneath the building. The event is free and open to the public.

I hope to see you there!


Here's a map showing the parking and Metro locations: 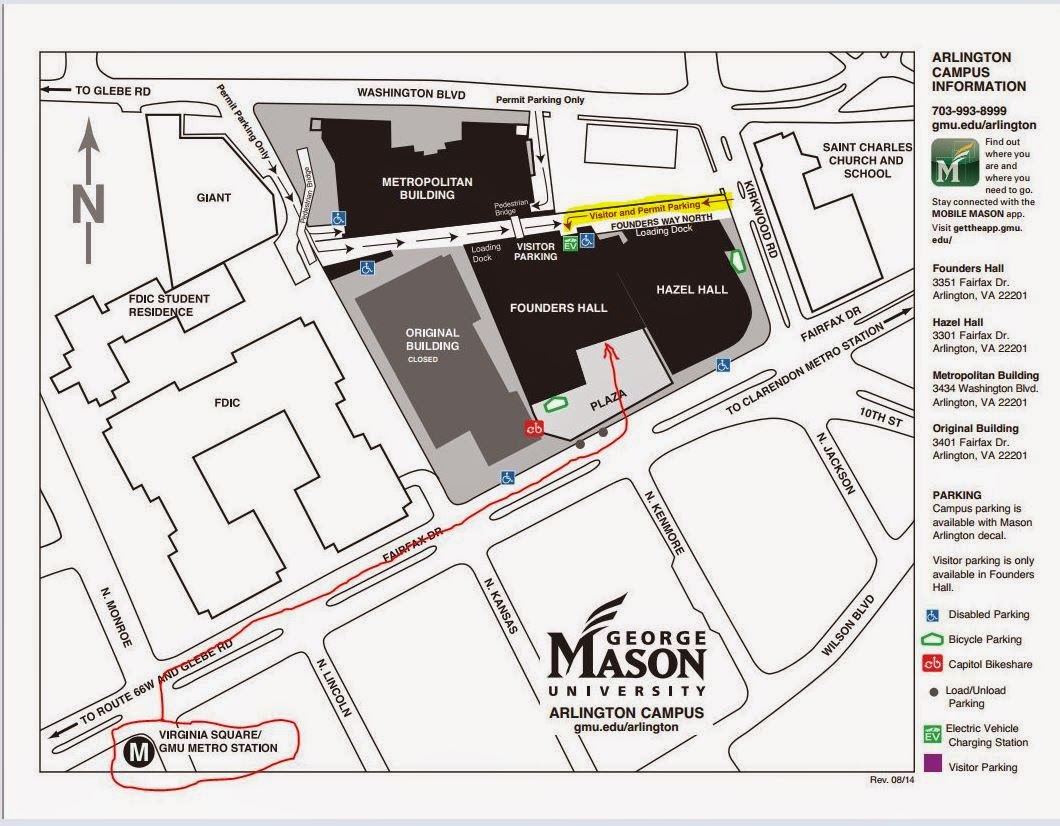 Posted by Johanna Bockman at 6:35 PM No comments:

Today, the Post published an article titled "D.C. ranks 2nd best for poor families," which described a report by the Citizens Budget Commission.(1) However, in contrast to the article's title, the article recognized that "being the most affordable place to live is not the same as actually being an affordable place to live." The article's title suggests that DC is one of the most affordable cities for poor families, but the report does not make this claim.

First, the CBC report stated that the very poor would have to use their entire income to pay for rent and transportation in DC and elsewhere:


Generally, all large cities in this analysis are affordable to moderate- and middle-income households...None of the cities analyzed is affordable for a single worker household or a very low-income single worker household. For a low-income family, only two cities [San Francisco and Washington, D.C.] are affordable, although very close to the threshold. The problem is particularly troubling for very low-income single households; these households, assumed to earn a wage equal to the national poverty line, require more than 100 percent of that figure [100% of their income] for location costs in all cities but Philadelphia, where location costs are 95 percent.

According to the report, DC is more affordable than other cities but still unaffordable for the poor in general, and the very low-income in particular. The title of the article was very misleading. Very-low income single workers would have to spend 112% of their income on rent and transportation.

Second, in the report, the authors use median income for the metropolitan area, not for the more narrow DC area, which means that the low-income families they are analyzing have much higher incomes than is the case within the more narrow area of DC. Data based on the DC Metropolitan area includes households in the counties around DC, which happen to be six of the ten wealthiest counties in the nation, according to Forbes, and thus presenting DC incomes as much higher than they actually are.

The CBC report defines these residents as low-income. In the DC Metro area, here are some jobs, which pay around $32,133 full-time:

In general, as I have written about before, middle-, low-, and very-low-income residents are forced to compete with each other for the very small number of affordable housing units in DC, while higher-income residents do not have compete in the same way for housing. As a result, many households end up paying more for rent than is financially sustainable. According to the American Community Survey (2012), among DC renters, 40.2% of households use over 35% of their income to pay their rent:

The Post should have been clear up front that the CBC report did not argue that DC is actually affordable for poor families, but rather it is more affordable than most for those making $46,000 and most affordable for single professionals making $65,000.

Last week, I was in San Francisco and learned about their very different system of affordable housing. This very intriguing information will be in my next blog post.


(1) While the Post says that CBC is nonpartisan, the Post did not explain what the CBC's audience or approach is. CBC gave its Corporate Leadership Award to Google, which was the focus of a panel at last week's American Sociological Association conference as a major actor in hyper-gentrification in San Francisco.
Posted by Johanna Bockman at 8:00 PM No comments:

I temporarily removed a blog post "Gentrification on Capitol Hill," which has been getting an insane amount of hits, mostly from spammers. I also restricted who can comment. These are temporary measures.

P.S. I re-posted "Gentrification on Capitol Hill," which you can find in the Blog Index under Gentrification.
Posted by Johanna Bockman at 9:43 PM No comments:

Immigration and the Decline of Capitol Hill (II redux)

In my previous blog post, I had discussed the observations by Mary Z. Gray, who was a child on Capitol Hill in the 1920s. She discussed how Capitol Hill had begun to decline during that time. In response to my post, my neighbor Sandy, a great researcher of our block on 10th St, SE, wrote:


I hope I haven’t misstated the basis of the post. Our block of 51 houses is typical in many ways of Capitol Hill’s development. The first black family bought a new house in 1872, joining 15 white families already living here. What was happening in the 1920’s? Both black and white families were moving here...The Hill was a viable community appreciated by its residents. [Read further in the comment section.]

From a brief look at the Census data, it is clear that where Mary Z. Gray lived, around 3rd and E. Capitol, was very different from the history of our block down at 10th St, SE. Between 1890 and 1930, Gray's neighborhood was almost completely white for blocks (with the exception of a few African American live-in servants and African Americans living in alleys in NE). The overwhelming majority of the whites were "native" whites, mainly with parents from the mid-Atlantic region, not from abroad. So, her area was quite different from 10th St.

Mary Z. Gray would likely have questioned whether "The Hill was a viable community appreciated by its residents," especially considering how she discussed the 1920s segregation she witnessed in Capitol Hill businesses, including those on Pennsylvania Ave, SE, between 3rd and 4th. She remember deciding that she wanted to have peach pie at one restaurant, Sherrill's, with her family's African American live-in servant Oscie:


One day as we were passing Sherrill's, I suggested that we go into the restaurant section and have some peach pie. It was August, and there is nothing to match fresh peach pie...[Osci said], "I knows you sick. I can't go into Sherrill's and sit down at a table and eat a piece of pie." She was recoiling as I neared the door. "Why not? Don't you like peach pie?" "Sure I like peach pie, but you know I can't go in there and eat it." She looked frightened....When we got home, I told Mama about what happened. "Tell her she can go to Sherrill's," I said..."No, she can't go into Sherrill's to eat," Mama said softly. "Oscie's right. You should have listened to her...That's just the way things are. There are certain places colored people can't go. That's just the way it is."... And that's the way it was on Capitol Hill -- and throughout most of the country -- in the 1920s. (301 East Capitol, pp. 31-32)

Racial segregation did not always exist in the past. The 1890s marked a worldwide turn toward racial segregation and divided cities. This segregation did not appear everywhere suddenly or naturally, but rather took a great deal of work by whites, driven in part by the desire to maintain their housing values and other privileges. I am going to look further at the Census data to see how the area was changing by age, race, immigration flows, and housing values.

If parts of Capitol Hill escaped the worldwide turn towards divided cities, then we should consider ourselves lucky. Yet, if we step back and take a look at DC in 2010, we can see Capitol Hill at the center of a divided city/region (green dots are white residents; blue dots are African American residents):

Posted by Johanna Bockman at 10:58 PM No comments:

Immigration and the Decline of Capitol Hill (II)

See the updated post: "Immigration and the Decline of Capitol Hill (II redux)"
Posted by Johanna Bockman at 8:45 PM No comments:

Immigration and the Decline of Capitol Hill

In the 1920s, Capitol Hill became vacated and began falling apart. The author of the amusing and insightful 301 East Capitol, Mary Z. Gray, noted the decline of Capitol Hill during her childhood at this time:


It wasn't just that there were not other children around; all of Capitol Hill seemed to be becoming decrepit. If Mama weren't having Grandpap's elderly sisters to Sunday dinner, she was making 'courtesy calls' on maiden ladies in black dresses who cherished 'papa's' memory, and feared that their inheritance was not enough to see them through. Consequently, their inherited family houses badly needed upkeep and repairs, but the money wasn't there to do it. Many once-elegant houses were falling apart. Capitol Hill was beginning its downhill slide, which didn't begin to reverse upward for the next 30 or more years. (p. 89)

Capitol Hill's downhill slide would continue for many decades afterwards. Many white families, including Mary Z. Gray's, moved to the suburbs, but they would or could not sell their houses to African Americans or other groups understood by whites at that time as reducing the value of their houses and neighborhoods. Whites used racially restrictive covenants and more informal means of housing discrimination to maintain their housing values. African Americans lived in particular parts of Capitol Hill, and their numbers on Capitol Hill increased in the 1930s with gentrification in Georgetown and the 1960s with the destruction and gentrification of Southwest DC. In the 1920s, those white families left behind could not maintain their houses and there were not new, younger white families moving to Capitol Hill. This downhill slide happened well before the Great Depression of 1929. What was happening in the 1920s?

Yesterday, I came across a very interesting additional cause of this decline. The glorious urban sociology professor at the New School Janet Abu-Lughod, who sadly passed away in December, wrote about a similar 1920s decline of the East Village and Lower East Side in New York City:


When immigration laws were changed in the early 1920s...the normal flow of successive new immigrants through the area was interrupted, leaving a weakened real estate market which in the period immediately following World War II collapsed entirely, as the children of the final European immigrant cohort availed themselves of both prosperity and the new opportunities for subsidized suburban settlement; they deserted the zone wholesale.(1)

The 1921 and 1924 immigration laws placed quotas on the number of immigrants by country of origin allowed into the US (while completely excluding Asian immigrants). According to George Mason University's History Matters website: "Initially, the 1924 law imposed a total quota on immigration of 165,000—less than 20 percent of the pre-World War I average." Could this severe reduction in immigration flows, based on racism and ethnic discrimination, as well as the increasing use of racially restrictive covenants and more informal means of housing discrimination, have helped bring about the collapse of Capitol Hill in the 1920s? Further investigation will be needed to figure this out.