Here is the fascinating 1993 documentary In Search of Common Ground about Potomac Gardens residents. The seniors living in Potomac Gardens (public housing in Ward 6) talk about their lives in rural North Carolina and other parts of the South -- many as sharecroppers, harvesting cotton and doing much difficult work -- before coming to DC in the 1950s. The interviewees remember their excitement about DC and their happiness that they no longer had to do agricultural work. At the same time, they also described the new difficulties they confronted in segregated DC.


In her classic, highly readable, eye-opening book on Mt. Pleasant, American University anthropology professor Brett Williams similarly shows the historical, social, economic, and cultural connections between the Carolinas and DC. African Americans migrating to DC (like those in the video) brought Carolina culture with them and traveled back and forth, maintaining ties with the Carolinas.
Posted by Johanna Bockman at 10:44 PM 1 comment:

What is the relationship between violence, inequality, and race? A 2005 review of the literature in one of the top sociological journals found:
This literature review clearly suggests that violence is the price of inequalities in wealth, income, job prospects, and other economic factors. As discussed in a previous post, Ward 6 has substantial income inequality. In Ward 6, structural advantage, such as the proportion making more than $200,000 per year, has increased and some forms of structural disadvantage, such as the proportion living in poverty, have decreased, but primarily through the displacement of the poor, such as through the closure of public housing, and the expansion of housing for the wealthy. Displacement destroys the social capital that the poor need to survive and thrive. How can Ward 6 let people stay in their homes, stop unwanted displacement, and minimize inequality and disadvantage in a new way? How can Ward 6 create employment and end poverty, while letting people stay in their homes?

Doing nothing is not really doing nothing; the current policy is 1) displacement and 2) reduction of social programs that will lead to further structural disadvantage.

Posted by Johanna Bockman at 5:49 PM No comments:

In response to several readers, I decided to make a map of the census tracts in Ward 6. I'm still working on it. Some of the tracts don't have number labels due to technical difficulties. For any tract, you can click on it to see its number and (for almost all of the tracts) a link directly to census data for that tract. You can find lots of great info about census tracts in the Census' American Community Survey.

A Reminder about Income Inequality in Ward 6

We can also see that the wealthiest census tract reflects the national income distribution *turned upside down,* the inverse of the national income distribution, with a rich majority and a poor minority in contrast to the poor majority and rich minority in the country as a whole. In census tract 67, well over 80% of households make over $100,000. In the US, about 80% of households make less than $100,000.

What are the consequences of such significant income inequality for a community?

A Reminder about Income Inequality in the US

The overwhelming majority of American households make less than $100,000.

Posted by Johanna Bockman at 3:22 PM No comments:

Well, I somehow deleted an old post, so I recovered it sort of and reposted it.

Posted by Johanna Bockman at 3:21 PM No comments:

Urban Renewal and Grief in Ward 6

Between 1950 and 1965, more than 202,000 families were relocated as cities demolished "blighted" areas and realized urban renewal. In 1950, DC began urban renewal in Southwest. These photos are of SW DC before and after urban renewal.

According to Where are They Now?, a fascinating study of those evicted from S 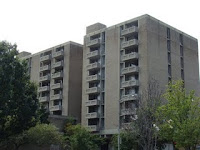 W, "Southwest Washington was a rat-infested, refuse-covered, unsanitary slum," from which DC cleared out the housing and 23,500 residents by 1960 "in order to build a 'new town in the city' with air-conditioned apartments for middle and upper income groups as well as some 929 public housing units...But where have the 23,500 poor people who inhabited Southwest gone?"

In the study, the researchers found and interviewed 98 families five years after they had left their homes in SW. This group is not particularly representative because they were a "demonstration group," a group of families that received extra help relocating, in contrast to a control group, which did not receive this help, and the rest of the over 23,000 people, who either left on their own or were forced out. But the researchers made several important findings.

What did they find? They found that the 98 families obtained housing that was physically improved, especially with indoor toilets and in well-maintained buildings, but they experienced new problems. (However, a significant proportion of their original SW housing had been in fine shape when it was torn down.) By 1965, government officials realized that the "myths" of housing reform and slum clearance "were based on rather vague and misleading correlations between the physical conditions of housing and such social factors," like poverty and crime. For those interviewed, poverty continued (a common experience among those displaced), and they then suffered "from another set of problems created by their removal from what was once their homes" because they lost not only their homes but also "a functioning social system." Some became sick with grief, like that experienced by a death in the family, which was a common reaction to such relocations. Seventy percent of those interviewed had visited SW after redevelopment, and "a significant number talked about crying and feeling sick" when they visited.

The respondents in public housing are less anomic, more hopeful as to what the future will bring them, have a greater sense of belonging to their new neighborhoods, believe more strongly that they can organize for community improvement, have a great knowledge of community institutions, and believe to a greater extent that the Government actions to eliminate the blight of old Southwest was correct.

While those forced out of their homes scattered across the city (except west of Rock Creek in nearly all-white NW), those in public housing made it to Arthur Capper (Ward 6; 900 5th Street SE, right next to the 6th St SE exit of the 395 freeway), Greenleaf Gardens (Ward 6; 203 N Street SW), and Kenilworth Courts (Ward 7; 4500 Quarles Street NE, right near the spectacular Kenilworth Aquatic Gardens). Arthur Capper senior housing continues today in a new building. (See the photos of Capper-Carrollsburg in my previous posting). In 2002, the residents of the rest of Arthur Capper and nearby Carrollsburg were forced out of their homes, the buildings were demolished, and housing and apartments for middle and upper income groups were build. Does this sound familiar?

Today, people reject urban renewal. In 1955, Ward 6 residents began the Capitol Hill Restoration Society and, in 1973, made parts of Capitol Hill an historic district. The demolition of physical structures as practiced during urban renewal is no longer acceptable to people across the political spectrum, but it does continue. Also, communities are still being demolished, and those displaced grieve for lost community. The DC government demolished both the physical structures and the social system in Capper-Carrollsburg. This has happened elsewhere in DC. The Facebook page for now-gone Eastgate Gardens Public Housing (Ward 7), sometimes called "Cinderblock City," states: "the interpersonal relationships that were developed between Eastgate residents still stand just like the cinderblocks that composed of the housing units! This page is is dedicated to those families!" The 345 Facebook members organize an annual reunion and refer to the Eastgate "family" and to Eastgate as "home." When the researchers asked the interviewees how they would improve urban renewal, the majority said that they should have been allowed to move into the new buildings in SW. I'll bet that the residents of Capper-Carrollsburg feel the same way. Is urban renewal continuing today?

Posted by Johanna Bockman at 3:17 PM No comments:

Cooperatives in Ward 6 and DC

After spending the morning writing a post on consumption inequality, I realized that I need to read more about the topic. Instead, in honor of the upcoming UN International Year of Cooperatives in 2012, I decided to start a DC Cooperatives map. So far, I've been amazed by the number of cooperatives in DC. You can see housing cooperatives, cooperative schools, a cooperative bank (though there are many credit unions that I didn't include), energy coops, a purchasing coop, a cooperative grocery, etc.

P.P.S. Let me know other cooperatives in town, and I'll add them. Thanks!