When "change" is really just more of the same

Yesterday, the Washington Post reported on the Takoma Junction development, which I discussed in a previous post. In the article, a city spokesmen said, "I think it's about change. Change is hard." So, those who are against the developer's vision of the redevelopment are against change? What is this change? A local resident said, "To me, these are the things you do to adopt progressive values to changing times." At the same time, the city seeks to "[maintain] the unique character of the community." The Post was presenting the developers as part of the inevitable future and the opponents as stuck in the past. But what if the demands of changing times force Takoma Park to lose one of the things that is in fact the way of the future?

The proposed redevelopment is really just more of the same. As Andy Shallal, owner of the wildly successful Busboys and Poets restaurants, said at the WPFW town hall on the Takoma Park redevelopment (around 51:48):


After a while [as a result of the gentrification of businesses], you start losing the essence of a community, you start losing the vibe, you start losing its soul. And it becomes just like every other place anywhere, anywhere in the United States. I'm amazed at how many of these new developments that are coming in, they look almost identical. Like everywhere you go, they look identical. Somebody comes up with an idea of having mixed-use with an open atrium at the center and a bunch of string lights across the center. And everyone is like, "this is so novel!" People get really excited. And they all come. It's like this worked here. Let's do ten of these. That's what happens.

When I happened to visit Bentonville, Arkansas (the headquarters of Walmart, not the reason I was visiting there), I thought, "This looks a lot like DC." The new buildings seemed to have the same architects as new DC developments. Cities, investors, and developers seek tried-and-true solutions, which leads to a homogenization, a standardization of cities that you see around the world. These solutions that developers tell us are the way of the future are in fact just more of the same, done over and over again.

Here are just a few thoughts about TPSS as the future:
But there are many other kinds of development envisioned by the Takoma Park residents, development projects that go beyond retail, such as Community Vision for Takoma Park and another group seeking to "set a brave and bold example."  Their ideas are not fear of change, but a call for real change in response to just more of the same.

Posted by Johanna Bockman at 10:07 PM No comments:

WPFW hosted a remarkable town hall, which brought together such interesting people and wonderful hosts. The concrete focus of the town hall was about a development planned for Takoma Junction, but the discussion expanded from this focus to include gentrification, displacement, and development more broadly. You can watch the town hall here.
Here is my report on some of the main issues that came up:

1) Definition of Gentrification.
There was a great interest in having some clear definitions. Here a composite definition:


Gentrification is the influx of capital (business and housing investments) and new middle-/upper-income residents (the 'gentry') into disinvested urban neighborhoods.

According to this definition, gentrification depends on previous disinvestment in order for investors to make money and depends on disinvestment in other parts of the city in order to concentrate investment funds. Gentrification is part of a broader restructuring of cities for a new middle/upper income class, transforming low-status neighborhoods into upper-middle-class playgrounds, thus it is a kind of class conflict. Gentrification involves both physical and cultural/symbolic displacement, so that people may be made to feel displaced even if they still in the neighborhood. Finally, as many social scientists have discovered through interviews with those displaced, displacement is devastating and terrifying (See Atkinson's "Losing One's Place: Narratives of Neighborhood Change, Market Injustice and Symbolic Displacement")

2) Commercial Gentrification.
Gentrification can also happen to businesses. At the town hall, the owner of the Busboys and Poets restaurants, Andy Shallal, reported that his K St branch had recently been gentrified out because the rent had been raised 30% (the branch is moving across the street to a lower-rent building). The owner of Bikram Yoga in Takoma Park and elsewhere, Kendra Blackett-Dibinga, also said that she had been gentrified out because another business bought her building. Shallal complained that all the new restaurants and developments "look identical" and are making DC look like everywhere else. Jane Jacobs called these new developments "the great blight of dullness." These developments, like the proposed Takoma Junction, signal to investors and potential new residents that Takoma Park is ready for more investments, but they do not necessarily provide much for low-income residents. Such gentrification can also crowd out businesses catering to working-class residents.

3) Does economic development necessarily cause gentrification and displacement? 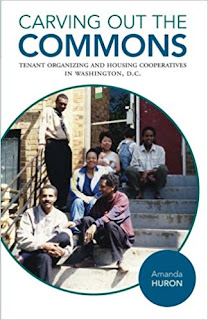 No, not necessarily. In the late 1970s, DC Mayor Marion Barry sought to transform DC into a cooperative city. He brought in Cornbread Givens, who had a vision of a city-wide cooperative system of producer cooperatives, consumer cooperatives, credit unions, housing cooperatives, and community cooperatives that would use the profits from the other cooperatives to provide services (health clinics, schools, etc). Here is a discussion of his vision (see from p. 71). This cooperative system would keep profits in the District and collectively owned by District residents. I highly recommend UDC professor Amanda Huron's new book, Carving out the Commons, which also captures this alternative economic development alive in DC today. Takoma Park is in a wonderful position for this kind of economic development because it has the amazing TPSS Co-op.

One of the town hall participants, Sue Katz Miller, had earlier talked on WPFW and called for another kind of transformational economic development that might bring people together without having to buy things. Sociologists have found that the plans for mixed-income development do not result in the social mixing assumed by them. Places such as retail businesses, cafes, and restaurants are not conducive to such mixing, but schools and rec centers are better for such mixing.


4) Put renters first!
Georgetown University sociology professor Brian McCabe has shown in his book No Place like Home that homeowners often physically and symbolically keep renters out of their neighborhoods and out of public discussions. Renters are often seen as not committed to the community. McCabe finds that civic and political engagement is driven much more by residential stability -- living more than 5 years in a community -- than by whether or not one owns a home. Takoma Park is majority renters, so renters should drive the discussion, since homeowners have had their say.

Well, there was so much more talked about by such inspiring people (including the amazing Emily Kombe, high school student in Takoma Park, and the TPSS workers)!
Posted by Johanna Bockman at 10:20 PM No comments: 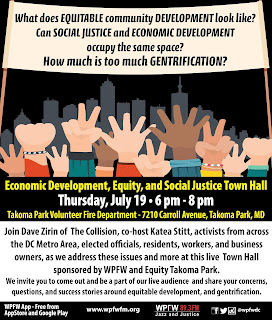 I'll be talking about theories of gentrification as part of WPFW's Economic Development, Equity, and Social Justice Town Hall in Takoma Park tonight 6-8pm. There will be many amazing community organizers and local activists discussing their work.

Here is the tentative schedule for the town hall:

Posted by Johanna Bockman at 7:40 PM No comments:

Fighting Gentrification Across the City (II)

David Rotenstein (@iVernacular and historian4hire blog) thankfully reminded me of another fight against gentrification: the lawsuit filed by Aristotle Theresa against the District's role in gentrification and displacement of African Americans. Does anyone have a link to the lawsuit and other related legal documents?

Here is the updated list of battles against gentrification:
Let me know about other battles to add to the list: johanna.bockman@gmail.com
Posted by Johanna Bockman at 5:02 PM No comments:

Fighting Gentrification Across the City

Every day I hear about people fighting to stop the DC government from giving away (or selling at very low prices) public land and buildings to private developers. The government does this by declaring this public property surplus. To surplus these properties, the Mayor must deem them "no longer required for public purposes." The privatization of these properties means that they then serve the interests of the new owners/investors. Many DC residents do not agree that these properties are no longer needed for public purposes. DC residents regularly seek to stop this process and keep these properties public, in order to serve local needs. By succeeding, they help their communities, which makes DC an even better place to live.

Here are the battles I have recently heard about (let me know about others you know about):
As DC geographer Katie Wells has discussed, DC has been disposing of public property for private consumption for at least the last 20 years: "City-level policymakers have sold schools, libraries, firehouses, and homeless shelters to developers of upscale gyms, luxury condominiums, and private art museums" (2014: 474). Later, Wells noted, "Since 1998 the D.C. City Council has tried to sell 68 percent (or 15 out of 22) of its public shelters" (2014: 484). You can see the current list of public properties being privatized in DC right now. In her article, Wells talks about how DC residents without homes and their allies stopped the surplussing of the Franklin School for years. Last year, the DC Government privatized the Franklin School, which developers are using to create "Planet Word, an interactive language arts museum and education space." The goal of the activists, housing for those without homes, was not realized.

Where are the other battles going on in DC? How can we help our neighbors in their fight to keep public properties for "public purposes"?

Posted by Johanna Bockman at 5:11 PM No comments:

After spending the past 10 months in New Jersey, I am happily back in DC. I got a lot of academic writing done in New Jersey, which was the goal. Today I made some updates on the blog: adding links to new sociological tools and related websites/blogs, revising the DC Public Housing Radio page, and updating the Blog Index. I plan to blog soon!
Posted by Johanna Bockman at 8:59 PM No comments: