The Repetition of Displacement at the Ellen Wilson Dwellings (II)

In response to my previous post, someone who lived in the Ellen Wilson Dwellings in the mid-1960s as a small child reminded me of a third displacement. In 1965, five of the Ellen Wilson buildings were razed (see map below from the DC Archives) to build the SE Freeway. This razing destroyed 79 apartments. If 3 people lived in each apartment, then over 230 people were displaced. If more lived in each apartment, then more were displaced. 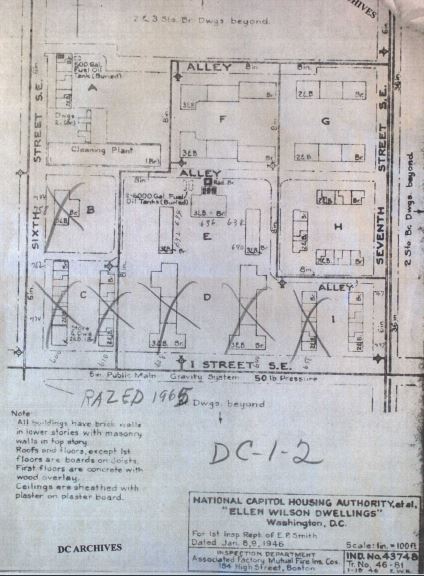 I know of one family that was moved to Arthur Capper public housing, but I don't know where the others went.

Of course, the freeway's path went a certain way and not other ways as a result of the influence of certain people. Those living in these five buildings did not have the power to stop the freeway from destroying their homes, while others on the Hill had this power. Did those with power on the Hill work with Ellen Wilson residents to stop the freeway from destroying this section of the Ellen Wilson Dwellings? (I know that there was much organizing to stop other parts of freeway.) If not, why not?

So far, we have three displacements of low-income African Americans basically on one block:

1) the 1939-1941 displacement, including the 300+ low-income African Americans living in the Navy Place alley, to construct the Ellen Wilson Dwellings, a white public housing project.

2) the 1965 displacement of low-income African Americans, and maybe some whites, from 79 apartments in 5 buildings. Possibly totaling 230 people.

3) the 1988 displacement of low-income African Americans in 134 apartments to renovate the buildings, which were destroyed and replaced with a mixed-income development. There were households living in 129 of the apartments. Seven households from Ellen Wilson were allowed to move into this new development.  If we use the earlier calculation of 3 per apartment, then ((129 - 7) x 3)) about 366 people were displaced.

How do we stop such repetitive displacement not only on this block but also elsewhere in Ward 6?

Posted by Johanna Bockman at 6:47 PM No comments:

The Repetition of Displacement at the Ellen Wilson Dwellings

Ellen Wilson was built in 1941 as a segregated white public housing project. African American groups protested the naming of the project for a known white segregationist and wife of Woodrow Wilson, also a white segregationist. According to the Washington Post in 1941: “Negroes have protested against the name. They claim Mrs. Wilson was responsible for segregating employees at the Bureau of Engraving & Printing.”(1) They also protested the creation of segregated public housing. Ellen Wilson basically sat on a large block between G and I Streets, SE, between 6th and 7th Streets. The north side of the block (G Street) housed only white homeowners and renters; this side was not demolished. Along the East and West sides, there were predominantly white residents. The South side was predominantly African American. Most significantly, over 300 African Americans lived in the block’s alley, called Navy Place. African American residents had lived in Navy Place for at least 75 years. To build Ellen Wilson, all the African American residents from the alleys and the South side of the block, as well as whites and African Americans from the East and West sides of the block were displaced. Not a single African American resident was allowed to move into the new Ellen Wilson.The Alley Dwelling Authority declared the block part of a “predominantly white” neighborhood and thus Ellen Wilson became a white public housing project: “Officials of the Alley Dwelling Authority, explaining why the new homes were to be occupied by white tenants, said the surrounding neighborhood is predominantly white.”(2)

By 1953, DC public housing was no longer allowed to remain segregated. It would be interesting to know if anyone from Navy Place or other parts of the block moved into Ellen Wilson at this time.

In 1996, the Ellen Wilson Dwellings were destroyed, after being abandoned for about eight years, and only 7 households from the 134 unit public housing project were allowed to move into the new development. The creation of the new development was part of a nation-wide movement against the segregation of minorities into public housing and was part of a local, deeply committed movement for social justice. These movements spoke out against the negative consequences of concentrated poverty. In the end, however, the outcome in 1941 and in 1996 were nearly the same: the displacement of low-income African Americans was complete in 1941 and nearly complete in 1996.

How did this happen? The answer so far seems to involve two main issues:
Queens College sociologist Stephen Steinberg has argued that claims about concentrated poverty are myths used politically by developers and politicians when poor people live on valuable land, like on Capitol Hill, which has been gentrifying since the 1960s. (Ellen Wilson was thus already part of a mixed-income community well before the 1980s.) Steinberg writes:


We have to be savvy about the political uses of the theory of concentrated poverty, which is invoked wherever the poor occupy valuable real estate that is coveted by developers, and which is part of the neoliberal agenda of reclaiming urban space that earlier was relinquished to the nation’s racial and class pariahs.(4)

In both 1941 and 1988/1996, low-income African American residents were displaced in the name of a form of development that claimed to help them but in fact hurt them. How can we avoid the displacement of our neighbors and protect such housing that is affordable?

P.S. The Repetition of Displacement at the Ellen Wilson Dwellings (Part II)