In this blog, I have noted how gentrification often acts like settler colonialism. Gentrification is often portrayed as motivated by "pioneers" taking territory block by block. Those being displaced are often disparaged. (For example, see "Urine and Early Gentrification" and "Eyesores, Urine Smells, and Gentrification" and "Washington DC as a Global City"). Real estate developers, area boosters, and elites encourage an amnesia about the violence done to communities and individuals by gentrification and settler colonialism by claiming that the displacement was "inevitable" or the former residents were "disorderly" or "criminal." But amnesia does not make the forgotten history go away. This social violence remains in the area as a kind of social haunting, as "a sense, a feeling, a way of thinking, an atmosphere that pervades within a community, influencing its future in myriad, perhaps unnoticed, ways." Have you experienced social haunting on Capitol Hill?

Sociologists like Avery Gordon have argued that we should pay attention to these ghostly feelings. They may be reminders of past social violence and may provide us insight into repressed pasts. They can also open up a variety of potential futures. These ghostly feelings may also explain why certain things happen around Capitol Hill. Here is just one quick example.

At 301 and then 324 Virginia Avenue, SE, Southeast House worked in the segregated community of Capitol Hill from around 1930 to 1962. Southeast House provided day care, classes for adults and children, after-school recreation, and many other things. The settlement house was run by African American women associated with Pan-Africanism. Ida Gibbs Hunt, a member of the organization that established the house, was one of the main organizers with W.E.B. DuBois of the early Pan-African Congresses in Paris. Howard University art professor Lois Mailou Jones taught art there. She was one of the early innovators to use African masks in modern art.

In 1962, the city leaders decided to place the new SE Freeway right on top of the Southeast House and a section of the Ellen Wilson Dwellings public housing buildings three blocks away. Forced out of the community, the Southeast House relocated to Anacostia.

The city could destroy the buildings, displace the residents, but they could not eradicate the spirit of Pan-Africanism. By the end of the 1960s, a mural appeared on one of the Ellen Wilson buildings that remained after the freeway project destroyed the others: 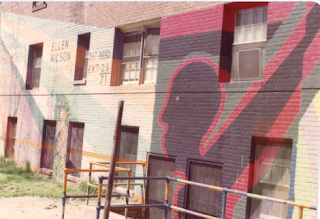 Capitol Hill's historic preservation movement identified with the Victorian houses of the 1890s (and styles of other nearby time periods), which was the time of expanding colonialism worldwide and Jim Crow in the United States. In contrast, this mural represented another temporality, the temporality of Pan-African globalization and anti-colonialism.

In 1996, the city leaders destroyed the Ellen Wilson Dwellings and this mural. A couple of years ago, a block north of the old Southeast House, a historic African American church -- Mount Joy Baptist Church -- was sold and turned into the Churchill condominiums. In his early career, Winston Churchill was Under-Secretary of State for the Colonial Office, a position that he had requested. According to a 2015 Washington Post op-ed, "As a junior member of parliament, Churchill had cheered on Britain's plan for more conquests, insisting that its 'Aryan stock is bound to triumph.'" Racism and colonialism continue to haunt Capitol Hill, but the spirit of Winston Churchill must still contend with the much more international and local spirits of Pan-Africanism.

Have you experienced social hauntings in Ward 6?
Posted by Johanna Bockman at 4:47 PM No comments: