Why is there homelessness? 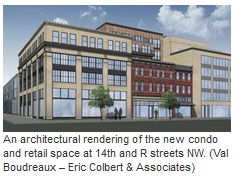 In the Post last month, Colbert I. King asked, "Why can't D.C.'s homeless be helped?" King did not answer his question but rather discussed previous failed attempts by DC Government to eradicate homelessness. It seems to me that gentrification is one of the root causes of homelessness. It does not have to be so, but it just happens to be so here.

DC has had many waves of displacement caused by gentrification. As I discussed in "The Consequences of Displacement," an early form of gentrification occurred between 1950 and 1960 when 23,500 residents were moved out of SW DC to make way for new middle- and upper-income, as well as some public, housing. At the time, it was understood that impoverished "slums" were being replaced with a mixed-income community. Highway construction displaced many more. Only the very luckiest could move back into their neighborhood, in the few spots in public housing. There were many people automatically excluded from public housing, such as single people no matter how poor. By 1955, 5,000 families were on the waiting list for public housing with little hope of getting a place. Many of these people doubled up with relatives, including with those in public housing, but the District often did not know where people went. By 1968, the District had descended into a housing crisis. 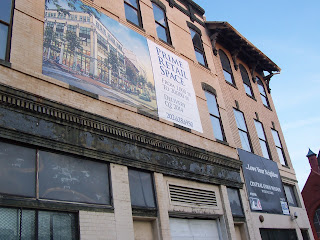 Today, gentrification has raised rents and converted low-cost rentals into high-cost rentals or expensive condos, which takes away affordable housing and creates new homeless people. According to DC Fiscal Policy Institute, over the past decade, "DC has lost more than half of its low cost rental units and 72 percent of its low value homes." Today, DC residents require an income of $60,240 to afford a two-bedroom apartment ($1,506 at fair market rent). To afford this, a minimum wage worker earning an hourly wage of $8.25 "must work 140 hours per week, 52 weeks per year. Or a household must include 3.5 minimum wage earners working 40 hours per week year-round" (NLIHC, p. 41). Furthermore, new 'affordable' housing is, in fact, not affordable for the poor, as I discussed in a previous post. 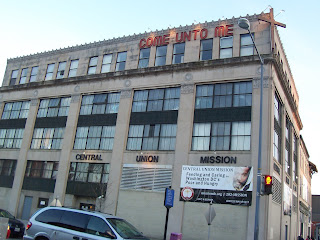 On the same day as King's article on homelessness, Moira E. McLaughlin's Post article "Boutique condos to take place of Central Union Mission" appeared. Central Union Mission is moving from 14th St and R St, NW, to the Union Station area. The Central Union Mission's executive director David Treadwell mentioned that the new location would allow them to reach "poor and needy people who have been pushed out of the [Northwest] corridor, but still have great need for the services offered by Central Union Mission." Both very low-rent housing and homeless shelters are being taken over by more wealthy owners, those with many housing choices already. The original article in the Post showed only a clean, ahistorical image of the Central Union Mission (see top left image), while the building as it stands now calls out for empathy from the neighborhood; in the image above on the right, the sign on the right-hand side calls out "...Love Your Neighbor. CENTRAL UNION MISSION." The sign on the other side of the building says (image on lower left), "CENTRAL UNION MISSION Feeding and Caring for Washington DC's Poor and Hungry." In place of the homeless and those housed but very poor, 50 boutique condos with "a lot of character" will sell for $419,900 to $849,900, housing those with many housing choices already. Such displacements are happening across the District and can be seen as a root cause of homelessness.

P.S. The new owner of the building is thinking about calling the new building "The Mission." What is its mission? The building's interior designer also designed the 14th-Street restaurant and lounge Lost Society, "Designed to evoke an underground, Victorian atmosphere." Is the mission to help bring back the white, racist, upper-class Victorian society, displacing everyone else?

P.P.S. The owner of building says, "All of our retailers are of a certain ilk, and they're all local. We like dealing with local tenants...high-end without question...We have a tremendous amount of interest at this point." Are they high-end local chains, as discussed in "What's wrong with chains?"?
Posted by Johanna Bockman at 7:01 PM