The Contributions of Public Housing 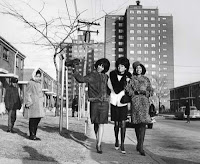 Someone recently sent me this post "Home of The Supremes & First Black Public Housing Complex to be Demolished in Detroit" by Duke University Professor of African & African American Studies Mark Anthony Neal. In Detroit, the Brewster-Douglass public housing project was closed in 2008 and is now being redeveloped. In this article, the Mayor of Detroit is quoted as saying:


The former Brewster-Douglass complex has a proud place in Detroit’s rich history, as the nation’s first federal housing project for African Americans; as the place where Joe Louis learned to box; and where Diana Ross, Mary Wilson and Florence Ballard formed the Supremes.

I base my argument on what I have learned from the oral histories that I am conducting with former residents of Ward 6's Arthur Capper public housing project. The MLK Library's Washingtoniana Division is now processing the first batch of these oral histories, and the public will be able to listen to these oral histories any day of the week.

During a recent interview, I asked one of the former residents why she thought that Arthur Capper changed for the worse in the mid-1980s. Those I have interviewed so far have stated emphatically that it was wonderful growing up in Arthur Capper during the 1960s and 1970s. So, what had changed? She said that 1) in the early 1980s, DC Park and Recreation dramatically cut the funding to the Arthur Capper Recreation Center and 2) in the early 1980s (1981 to be exact), one of the main employers in the area, the Washington Star, went out of business.

The Arthur Capper Recreation Center, probably like other public housing recreation centers, was an amazing source of activities that not only occupied the time of children, but developed their skills. The rec center had coaches for the boys sports teams and girls sports teams, which practiced seemingly everyday. These teams regularly competed with teams at other public housing projects, especially Greenleaf in Southwest. These were seriously competitive games that brought out people from across the city. From all this practice, these children turned out to be some of the best athletes in the city.

The rec center also organized an enormous music scene. Well, there were already male singing groups that regularly met, maybe everyday, on every corner of Arthur Capper to sing Motown, such as the Dells, and R&B. Then, in the early 1970s, Arthur Capper had numerous soul/R&B bands, including Free Form Experience (definitely listen to this), Redds and The Boys (who had a 1980s hit song “Movin’ and Groovin’”), Mousetrap (earlier Young Sounds of Soul), The Spirits of Liberty, Zoom Band and Show, Larry Anderson's K Street Crew, and Keith Hatcher's band. Some bands from other parts of town were seen as competition, such as East Coast Connection (definitely listen to this) and Brookland Highlights. Kids would learn instruments from watching these bands play and then would form their own bands. Like the sports teams, all these bands practiced a lot. Every Friday and Saturday night, bands from Arthur Capper or from elsewhere in the city would play at the stage at the Arthur Capper Recreation Center or in other places around Arthur Capper. [The role of DC Park and Rec reminds me of the importance today of the US National Park Service's life-shaping concert scene at Fort Reno and Fort Dupont, as well as my own experiences learning to swim and play tennis through the park and rec.]

The DC government and federal government cut funding to public housing and recreation centers for a variety of reasons, including due to significant cuts in federal aid to cities. During the 1960s and 1970s, the Federal government invested heavily in cities because states neglected cities. The Reagan administration severely cut the federal budget, including federal funding to cities. I need a more reliable set of data, but here is something general from the National Housing Institute:

At the moment, I have only anecdotal evidence that the activities at the Arthur Capper Recreation Center were significantly diminished, leaving the children in the area without the development of their sport, musical, and other skills.

At about the same time, the Washington Star newspaper went out of business in 1981. The Washington Post took over the building and presses, but the number of jobs seemed to have dropped significantly. Adults and children had regularly worked for the Washington Star. Everyday after school, kids were picked up by trucks and delivered around the city to sell newspapers. This money was extremely important to both the kids and their families. Adults could work regularly or drop by for temporary work. The end of these jobs placed an additional burden on the Arthur Capper community.

So, this post is a first attempt at trying to document the vibrant sport and musical life in public housing that created such stars as the Supremes and to explain some of the reasons for the changes in public housing life in the 1980s and 1990s.


Posted by Johanna Bockman at 5:46 PM