The Art of Gentrification 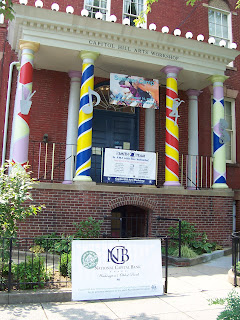 Yesterday, I walked by the Capitol Hill Arts Workshop (CHAW) and saw that, below a banner advertising summer camp, there was a banner thanking a real estate agency and another banner thanking an area bank for donating money to CHAW. Let me state that I love CHAW, which taught me to draw and paint and introduced me to a wonderful community. At the same time, these banners suggest a convergence of the interests of the arts community with those of real estate and finance. Does this convergence come at some cost to the arts community and/or to Ward 6?

In 1972, CHAW began by offering art courses at local churches. CHAW then moved into its current location, at 7th and G St SE, in 1980. It is interesting that the Capitol Hill Restoration Society, which has always counted real estate agents and bankers among its members, opposed 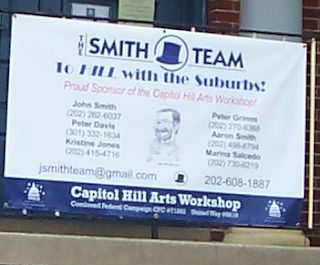 CHAW's application in 1978 to use this space, while the ANC supported the application:

"The Capitol Hill Restoration Society voted to oppose the application on the grounds that the four parking spaces would not be adequate, and that the school would create noise and traffic congestion in the residential area." (DC Register Sept. 29, 1978)


In the 1970s, the role of artists in communities was in transition, as discussed by Vanderbilt University sociologist Richard Lloyd. Even as late as 1976, political scientist Daniel Bell argued that artists were a threat to the economic order. More bohemian artists had long criticized the wealthy and 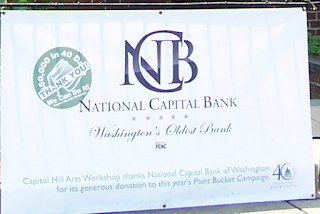 capitalists, as well as mass culture, often understood as epitomized by the suburbs. Bell thought that the 1960s counterculture lifestyles had infiltrated American society and might undermine our economic system. Viewing CHAW artists as threatening mainstream society with their counter-cultural lifestyle and politics, as well as their "non-profit" community art school, might explain the decision of the Capitol Hill Restoration Society to oppose CHAW's request at first.

However, as Brooklyn College sociologist Sharon Zukin explains, some middle-class professionals during the 1960s were drawn to the art world and artistic lifestyles. Artistic knowledge of and taste for counter-culture art also became new forms of status. In New York City, the city government and real estate developers specifically targeted these groups as the new residents for loft developments. According to Richard Lloyd, artists in Chicago created an environment conducive to a new kind of economy based around culture, aesthetics, and the arts, replacing the earlier, more rigid Fordist economy and the traditional working class. (Columbia University sociologist Saskia Sassen has argued that "global cities" worldwide have made this shift away from production and the working class towards a cultural and service economy, which manages production that now functions on a global scale.) In the late 1970s and early 1980s, the real estate and financial industries, as well as city governments, realized that the arts could be mobilized to bring more wealthy individuals into cities and increase returns on real estate investments. They thus realized that the arts could be used to gentrify cities.

In their 1984 article "The Fine Art of Gentrification," Rosalyn Deutsche and Cara Gendel Ryan argue that this convergence of interests involved serious costs. In New York's Lower East Side and East Village, artists created an edgy world of galleries, which inflated rents and pushed out the poor. Many of these poor had once been the working classes, who were further impoverished by Reagan's cuts in social services and educational spending. Father Joaquin Beaumont, the vicar for the Lower East side, noted how close they were to the financial district, where many worked: "I'm sure they would love to live closer instead of commuting to the suburbs every day. I think the plan is for the middle class and upper class to return to Manhattan. That's the gentrification process. It's so unjust. Those with a lot of money are playing with the lives and futures of people who have so little hope." Many artists (not all!) and the art world refused to discuss their complicity in this gentrification and immiseration, but rather perceived it as positive and inevitable.

Are there costs for the arts in Ward 6? This question requires more research, but here are some thoughts:

Posted by Johanna Bockman at 1:42 PM