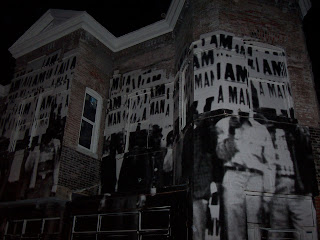 While having dinner out on 14th St, NW, our friend asked, why is African American history being commodified [to support gentrification] on 14th St? Why is there a mural of the 1968 Memphis Sanitation Strike on the side of a soon-to-be opened new restaurant here? We walked up the street to the building of the planned Italian restaurant and took this photo. What function might this mural of the 1968 Memphis Sanitation Strike be providing?

Of course, one could say: U and 14th Streets have been a center of African American life, and this photo just captures and celebrates that life. Yet, Dr. Martin Luther King, Jr. made his very last speech at the 1968 Memphis Sanitation Strike, "I've Been to the Mountaintop," supporting economic equality, unions, jobs, and a reorganization of the economy (King Institute Encyclopedia). He would never have supported the gentrification and the displacement happening on 14th St (see previous post). The day after he made this speech to striking sanitation workers, Dr. King was assassinated. He and everyone knew that he was in grave danger for his ideas and actions. For example, in his speech, he said, “Like anybody, I would like to live a long life--longevity has its place. But I'm not concerned about that now… I've seen the Promised Land. I may not get there with you. But I want you to know tonight that we, as a people, will get to the Promised Land.” During their two-month strike, the Memphis sanitation workers were also in grave danger. They had been attacked with mace and tear gas; the mayor had declared martial law. The people depicted in the 14th St. mural were marching within a world of violence.

Yet, the mural is functioning in several ways, not merely as a discussion piece. The artist of the mural, JR, is the winner of the $100,000 TED prize in 2011 for his pledge to “use art to turn the world inside out” (Washington Post). In contrast to Dr. King's and the sanitation workers' demands for significant economic change, JR's demands are for vague existence:


"This says it all, 'I am a man,'" said JR, referencing the signs the pickets are holding in the photo. "They created such a strong and powerful image that still resonates today, but in another context. Still people say, 'I am a man,' but they care less about the color [of their skin]. It’s 'we are humans, we are here, we want to exist.' And I like that, I think that’s pretty powerful." (Washington Post)

What function is the mural providing? Is the mural helping to sell the U St area? Is it raising property values by providing history and authenticity, even though it isn't technically local history? Is it possible that the mural helps to assuage the guilt some have about displacing African Americans from the area? Maybe through a kind of "sanitized" celebration of general African American history by erasing the call for economic equality and against displacement and by replacing it with a vague embrace of humanity and existence? Or does the mural assuage this guilt because it suggests that the bad guys are racists in the South, in the past, and maybe in the suburbs, but not the people eating and shopping on 14th St.? Is the mural an extremely attractive tool in the current battle over who has a right to the city? Does it somehow give license for developers to make such signs declaring that luxury condo owners can now say, "This is My District"! Well, all of this could be true.
Of course, the mural could be mobilized for a renewed call for economic equality, unions, jobs, and a reorganization of the economy. That would require much more than an image; it would require the decades of organizing work and skills that DC's community organizers have. Now, that might "turn the world inside out."

Posted by Johanna Bockman at 8:16 PM