Priced out of Public Housing 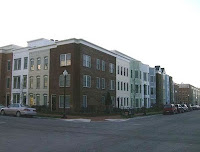 When you take the 6th St SE exit off of the 295 freeway, you can see the new senior public housing building on the right-hand side of the street (photo on left). At the stop light there, if you look back to the right, you can see a large expanse of new townhouses (photo on right). This area south of the 295 to M St and between 2nd and 7th St SE was the Arthur Capper and Carrollsburg public housing developments. These two developments housed 707 low-income and very-low-income families and seniors. A very interesting fact is that today HUD considers households making up to $82,000 in DC to be low-income because they are increasingly priced out of DC.

With HOPE VI funding, both developments were demolished and redeveloped as a public-private mixed-income project. HOPE VI funding requires the DC Housing Authority to replace each unit of public housing, all 707 units, and thus not eliminate public housing from the site. The new development has many new townhouses. When completed, there will be 323 units. Using the developer's site plan, we see many townhouses starting at $662,000 or more, workforce townhouses with subsidized mortgages for those making $82,800-119,025, and affordable apartments (I was told by the developer that these were for those making around $50,000-60,000).

From the very helpful DCHA, I found out that 339 "public housing" units have been recreated on the Capper-Carrollsburg site, leaving 368 to be constructed. So, who lives in the 339 units? Those allowed in the units have to make a certain percentage of Area Median Income (AMI), which is $103,500 in DC. HUD considers those with up to 80% AMI ($82,000) to be low-income (though DC has tended to stick closer to the 60% threshold).

Realizing that even the middle class is becoming priced out of DC, the Federal and DC governments began to set aside "workforce" housing. Yet, those with less than $41,000 incomes are in truly dire straits. The ever expanding market of high-end rentals and houses drives the neglect of middle- and low-income housing demand. Nationwide, the number of public housing units has decreased by 250,000 (18%) from 1991 to 2007 and the number of privately owned federally subsidized units have decreased by over 150,000 since 1997 (Housing Policy, p. 39). According to a 2007 DCHA report, the DC waiting list for public housing has 29,756 individuals/families on it and the DC waiting list for vouchers to rent on the private market has 48,748 individuals/families on it. While there is more and more demand for affordable housing, subsidies are provided to others. Around 7 million low-income renters received federal housing subsidies in 2008. In 2008, 155 million homeowners took mortgage deductions on their federal income taxes. These deductions and other homeowner tax benefits exceeded $171 billion, mostly going to those with incomes over $100,000 (Housing Policy, p. 7). Priced out of public housing in many ways...

The "low-income" category has been defined upward. It is true that the middle-class is being priced out of DC. At the same time, the poor, including the working poor, have been pushed out of such places as Capper-Carrollsburg. Rather than setting up a choice between helping either those making $50,000 or those making $20,000, we should think about how we as taxpayers are helping those who can afford $800,000 townhouses.

Posted by Johanna Bockman at 1:18 PM