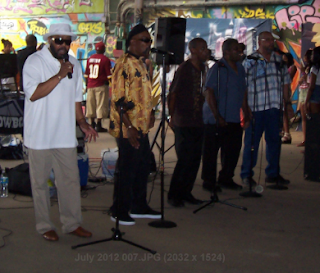 Yesterday, in Garfield Park (2nd and G St SE), I spent the afternoon at the annual reunion of the former residents of Arthur Capper public housing. It was a great party. Hundreds of people, young and old; great music (including several musical groups, see photo); lots of food. As I mentioned in a previous post, this reunion is just one of many activities they have throughout the year. Many of these activities happen in Garfield Park since Arthur Capper (also know as Cappers) was located just on the other side of the freeway.

When I asked people where they lived before moving to Cappers, I noticed that many people's families had been forced to move several times around the city. Some of their grandparents had lived in Georgetown, where gentrification in the 1930s and through the 1950s forced African Americans out. Many others had parents or grandparents who had lived in the thousands of houses demolished between 1954 and 1965 by urban renewal in Southwest DC (see my previous post). The census data over the decades shows a substantial decrease in the number of African Americans in SW, here from over 9,000 in 1950 to just over 2,000 in 1970:

Over time, census tract 64 stayed about the same with over 90% African Americans, while census tracts 61 (2,267 to 388) and 62 (1,752 to 109) decreased substantially. (You can find a census tract map below, which has more info if you click on: View Ward 6 Census Tract Map in a larger map).  The lucky ones made it into public housing, since there was very little available affordable housing, especially for African Americans. Georgetown and SW were no longer an option, and Capitol Hill has been gentrifying since at least the 1960s, so people could possibly find housing in the Eastern parts of Capitol Hill. In addition to those who came from Georgetown and SW, I talked with two people who had lived in row houses on Capitol Hill, which were then demolished, in the case of one person, to make way for the 295 freeway and, in the case of the other, for public housing.

The majority of people I talked with, however, moved out of Cappers well before it closed, when they became adults in the 1970s and 1980s and got their own places elsewhere in the area or in the country. However, as one man expressed the general feeling: I moved out, but I never left. Everyone talked about visiting regularly, visiting "home" and "family."

When Cappers closed, people were forced to move again. Very few have been allowed to move back into new Capitol Quarter development because of the quite high income requirements and other restrictions. I met two women who had moved back. One of them was quite excited about her place. One senior had just moved back, many years after Cappers had closed. People were dispersed around the area and elsewhere. For example, one young woman told me that she now lives in a "rough area" of Ward 8 and hopes to move elsewhere.

In the face of repeated displacement, the former residents of Cappers continue to talk about Cappers as their "family" and about the importance of "togetherness" and "community." They are still building community now at Garfield Park.


View Ward 6 Census Tract Map in a larger map
Posted by Johanna Bockman at 2:14 AM