All PUDs are Not Equal 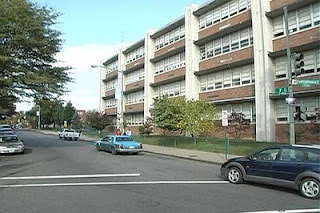 Hine Junior High across from the Eastern Market Metro is being torn down and redeveloped by Stanton-EastBanc. ANC 6B is managing the PUD (Planned Unit Development) process. To collect the ideas of the "6B community," ANC 6B set up an online survey, asking respondents to list benefits or amenities, as well as concerns about traffic, management, retail choices, etc., that should be negotiated with the developers. As of a few days ago, they received over 200 responses. Who is really included in the Hine PUD process? Of course, everyone is invited, but is the Hine PUD process really inclusive?
In contrast, we can look at the PUD process in Near SE-SW. Back in March, I attended the Near SE-SW Community Summit organized by the Near SE-SW Community Benefits Coordinating Council (CBCC) with the help of DC-based AmericaSpeaks and LISC. The summit was open to everyone in ANC 6D (others were welcomed too) with the goal of figuring out the community priorities of residents in order to better inform ANC 6D policies, especially given the extensive development going on in the area. It was news to me that such citizen summits happened a lot when Anthony Williams was mayor, but seemed to disappear with Adrian Fenty. The organizers specifically targeted different groups in the neighborhood to get a representative sample: young and old, poor and wealthy, men and women, etc.

It was an extremely interesting process. We were assigned to a table, where we introduced ourselves and got to use our "clickers," devices that allowed us to personally vote. Immediately, we used the clickers to get a sense of the demographics in the room, which showed a good representation of young/old, long-term residents/new residents, and a variety of races (1% Asian/Pacific Islander, 33% Black/African-American, 4% Hispanic/Latino, 1% Native American, 54% White/Caucasian, 6% other) though it wasn't a perfect reflection of the area population. (The summary report has the demographics, goals, findings, and much more).

At our tables, we talked about which topic area we wanted to focus on that day:

Then, we moved to a new table representing our chosen topic. At our new table (I chose housing), we introduced ourselves again and began to discuss our topic specifically focusing on the area's assets, challenges, and then concrete projects that could be taken. Each table had two non-area mediators. One mediator helped organize the discussion. The other mediator recorded our ideas on a laptop computer. In a corner of the room, a group of people on computers organized these thoughts coming from various tables into common themes. At the end, we voted for the two concrete projects we wanted most. Some of the chosen concrete priorities were developing pre-K, using the public schools for adult vocational training, increasing locally owned businesses, creating housing desired by the current residents, and developing community gardens.

The rest of Ward 6 could benefit from such community summits because we could get a sense of residents' priorities. The process took four (very interesting) hours, but I felt that we did not completely clarify the priorities. The summit is considered a step towards a Community Benefits Agreement (CBA), which would help the ANC to negotiate better and more responsibly with developers, the DC government, and other stakeholders because the ANC would know the actual priorities of constituents. I was concerned that developers could use these CBAs to legitimate all sorts of projects not in the spirit of the CBAs. CBAs are a nationwide movement. The Washington Business Journal shows that CBAs are already a big topic of discussion across DC. In spite of some concerns, I found the summit a very interesting and useful process.

A bit different from the Hine PUD, no? Wouldn't it be great to have a community summit in the Eastern Market area (to talk about Hine, etc)?

P.S. See related posts: All PUDs are Not Equal (II) and Why don't the poor go to our meetings?

Posted by Johanna Bockman at 11:10 PM