New Book on U St. 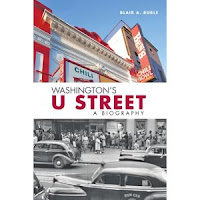 Urban historian Amber N. Wiley has written a great review of Blair Ruble's Washington's U Street. Ruble, who directs the world-famous Kennan Institute and the Comparative Urban Studies Project at the Woodrow Wilson Center downtown, explores U St as a "Contact Zone" and DC as an ambiguous place " by virtue of its function as the seat of the federal government and geographical location between North and South." One particularly interesting part of the review:


Ruble situates Washington within a network of three cities that include St. Louis and Baltimore that had a black population consisting of a majority of free blacks by the outbreak of the Civil War. Contraband camps set up during the Civil War and the creation of the Freedmen’s Bureau also added to the early important presence of blacks in the city. Ruble therefore refutes the idea that Washington became an important center of African American life only beginning in the early twentieth century. This point is significant to Ruble and other scholars of Washington history such as James Borchert, Kathleen Lesko, Valerie Babb, and Carroll R. Gibbs because it emphasizes the contributions of free and enslaved African Americans to early life in the republic.

I'll be talking more about this point in an upcoming post.
Posted by Johanna Bockman at 1:28 PM